The management of the Korle Bu Teaching Hospital (KBTH) says it will not take referrals from other health facilities following a shortage of beds at the Surgical Medical Emergency Unit of the hospital.The lack of beds at the unit has forced doctors to treat patients in plastic chairs and on the floor following a directive by the health minister for doctors not to turn away patients due to lack of beds.According to the Public Relations Officer of KBTH, Mr Mustapha Salifu, the move is part of measures to decongest the facility after overcrowding of patients has made it difficult for doctors to work at the SME.Some photos making the rounds on social media since Monday has caused outrage among sections of the public with some questioning the environment patients were being treated in."You know, this is a 36-bed facility unit but as at yesterday, the patients that we had were in excess of 60. So, which means that we have literally doubled the number of patients that we should have at the SME. So that was why we had patients on chairs and some of them were even outside," Mr Salifu said in an interview on Joy FM."This morning there was one patient but fortunately the person has been moved in because space was created for him to move. At the moment, we are linking up with other hospitals to inform them not to refer, they can do telephonic consultations, we'll give them guide on how to deal with those cases except the dire emergencies that they will still speak to us and we will take them.

"We are in the process (of informing them), usually we would want to do this for 48 hours to allow the place to decongest so that we can start receiving but for the dire emergencies that cannot receive help anywhere except here, they can still fall through but they have a way of contacting the emergency so that we deal with that". 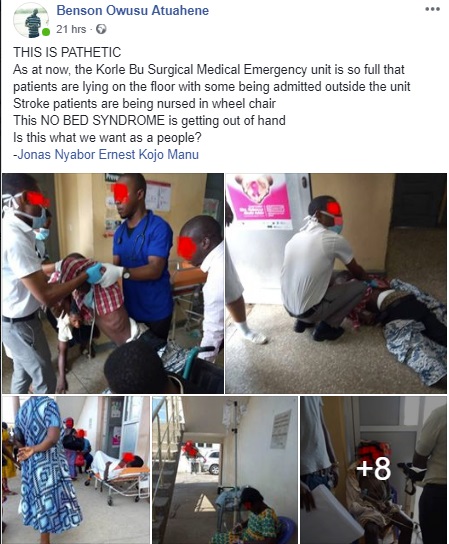 According to Mr Salifu, the situation at the SME has improved today and no patient was being treated outside in the corridors and under the stairwell currently."So, some of the patients were outside whilst receiving treatment but thankfully today we have been able to shift, to transfer some of the patients to the ward and space has been created where they have all been moved in now but we still have patients sitting on chairs receiving treatment at the SME now, as I speak to you now. That is why I want to tell our sister hospitals not to refer any further... to give us some time to decongest after that we move back," he said.